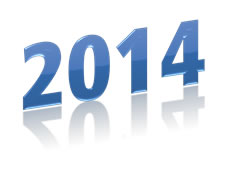 We all had high expectations for 2013.  A favorable lending environment, deep piles of private equity “dry powder” sitting on the side lines ready to invest and tax issues seemingly put to rest set up an environment ripe for M&A activity.  However, the first half of 2013 was quiet… eerily so, with few completed transactions. Business sellers raced to complete transactions at the end of 2012 in advance of tax increases for the coming year and few deals flowed into early 2013.  The second half of the year picked up steam and it looked as if we’d be able to make up some ground, but the momentum was not sustainable.  With no urgent incentives to finish transactions by year’s end, deals didn’t get done and 2013 just never lived up to expectations.

Interestingly, the same factors that created a sluggish  2011 crept back in 2013.  Uncertainty in tax policy, healthcare reform and “fiscal stability” or lack-there-of became areas of concern for business owners and investors alike. M&A activity hit an 8 year low, dropping below dot com levels.  Investors were reluctant to invest in the unfamiliar, so turned to less risky ad-on investments to current portfolio holdings. Smaller size deals became highly sought after and values were driven higher.  The middle market was the place to be in 2013.

So, what’s in store for 2014?  We again hear that the coming year is ripe for increases in M&A activity and we are cautiously optimistic.  Private equity investors are still flush with cash and looking to invest and the lending environment is favorable.    Our dealmakers report a backlog of deals that will close in the first quarter of 2014, kick-starting the year. But how can we be sure that wholesale economic recovery is around the corner?  What’s it going to take?

A balance between sectors, more cross border deals and an increase in deal volume would be good signs that we’re on our way.  According to a recent PwC CEO survey, at least 75% of respondents expected corporate growth from either organic or inorganic means and nearly half of those respondents expected to grow by acquisition within the next 12 months.  The middle market will still be that highly sought after place both strategic and financial buyers will be committing capital so as to keep their risk levels in check.  If you are the owner of a middle market business and will be considering a sale within the next few years, now is a great time to start planning.  With the baby boom generation now transitioning from business ownership to retirement, there will be a “window” of opportunity to exit optimally.  You wouldn’t want that window to slip away.