With the value of worldwide M&A deals as reported by Thomson Reuters down 13% during the first half of 2013 compared to the prior year and cross border deals off 34%, it might seem strange to be cautiously optimistic about international acquisitions.  A look at what has been unfolding in recent weeks however indicates there may be a window of opportunity in Europe for U.S. companies that will not soon return. 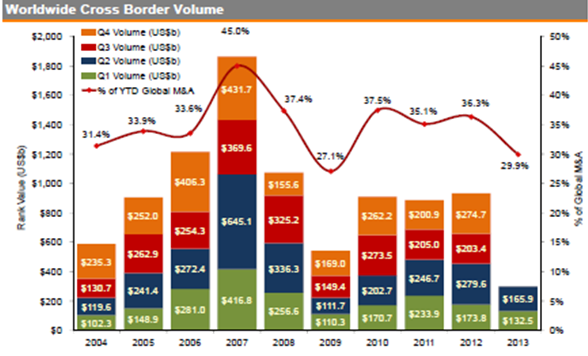 U.S. companies are positioned to go on the hunt.  A recent report by KMPG found that, “U.S. companies have more capacity than their global counterparts…”.  “Relatively easy access to capital, elevated cash levels on corporate balance sheets, and low interest rates in the U.S. translates into high transaction capacity…”.  While the US economy is still not generating the desired growth in jobs and regional weaknesses persist, sectors like energy are doing quite well and others like real estate and manufacturing are beginning to show very positive trends.

Confidence is rising.  Most U.S. confidence indices have been trending upward.  The U.S. Business Optimism Index moved up again over the prior quarter and is now above its long-run average.  The CEO Confidence Index has been trending upward and the Duke University/CFO Magazine Global Business Outlook Survey showed CFO optimism about the U.S. economy is above its long-run average, though U.S. based CFOs were a bit more reserved.  EY recently concluded, “large corporates recognize there is a favorable environment for deals and are actually expecting more M&A to happen – but by others.  Most are adopting a “you first” approach…”.  It shouldn’t take much however to begin to nudge these U.S. companies into an acquisition mode and Europe may be tempting.

European Countries May be Turning the Corner

In fact, that nudge may be in the works.  First, European M&A target valuations are generally attractive.  Second, while there is still mixed data, a look at recent reports points to improving conditions in the Eurozone and surrounding countries and may signal a trend which could begin to entice U.S. acquirers.

In Italy, the Eurozone’s third biggest economy, GDP fell less than expected in Q2 buoying hopes for stabilization and a turnaround.  This good news coincided with June data from Germany, the Eurozone’s biggest economy, which showed orders grew by 3.8% from the prior month making it the strongest gain in eight months.  At this writing it looks like German Q2 GDP figures will reflect a significant pick-up.  The European Central Bank cut interest rates in May and has taken the position that they will continue to nurture their economies.  Eurozone leaders have relaxed deadlines for budget targets.

Though still extremely high, Spain’s Q2 unemployment rate fell for the first time in two years.  Howard Archer, chief UK and European economist at IHS Global Insight, was recently quoted saying, “We believe that the Eurozone GDP actually managed to stop contracting in the second quarter of 2013, after a record six quarters of decline, as Germany saw faster growth and the rate of contraction slowed appreciably in Italy and Spain”.  The Markit Eurozone Composite PMI®, based on surveys of thousands of companies across the region and a reliable indicator of growth, jumped to an 18-month high of 50.4 in July from 48.7 in June.  That beat even the most optimistic forecast and is the first month the PMI has been above the 50 mark that divides growth and contraction since January 2012.

News from the U.K. has been extremely encouraging with the announcement that June exports reached their highest level ever.  Britain’s construction level jumped 1.4 percent in Q1, while manufacturing hit its highest level in 21 years and new car sales jumped 12.7 percent.  KPMG reports strong permanent and temporary staffing gains across the region in July.  The Investec Manufacturing PMI for Ireland showed a pick-up in manufacturing, as well as increased output and employment growth in July.  In the Czech Republic and Poland July reports on the manufacturing sector showed gains and forward looking surveys of business expectations are solidly on the positive side of the scale.

Now May be the Time to Make a Move

Increasing evidence suggests a turning point in Europe’s economic woes and could mark a particularly attractive time to hunt for acquisitions before valuations increase.  Cross-Border M&A activity is certain to grow in coming years along with the globalization of business.  That growth may begin showing up soon as cash rich U.S. companies and private equity funds sense the timing is ripe.

Thoughts to Consider When Making a Move

While large targets may be compelling for some, more cautious buyers may wish to focus on smaller targets.  Several studies have shown that smaller targets, relative to the size of the acquirer, have the highest chance of success. There are a number of factors that may account for this including the reduced complexity of the integration process.

Whether the objective is to expand market, add products or services, acquire intellectual property or talent, it is important to note some added challenges in foreign acquisitions.  Many of these are obvious but no less important and include cultural, legal and often language differences.  Without a buyer’s mastery of these elements an acquisition could prove to be costly.

To improve your chances for success, consider choosing a global investment bank with people on the ground in the country that you are targeting.  Your investment banking team will typically include a domestic banker who will coordinate with you at your home office while working with his counterpart in the target country.  With a fluency in the local language, knowledge of local business and cultural nuances and a general understanding of the legal system, a local investment banker becomes a critical part of the team.  This banker will be better positioned to identify target companies and more likely to open a dialogue than a foreign buyer who may try a direct approach.  He will also be able to recommend legal and due diligence professionals who are local and proficient in their professions and he will act to shepherd the process along to the finish line in conjunction with his domestic colleague.

Economic reports coming from Europe in just the past couple of weeks are increasingly pointing to a bottom and turnaround.  With strong balance sheets and improving domestic markets, U.S. companies are positioned to pounce on attractively valued European targets.  Declines in first half cross-border M&A could begin to reverse as these U.S. companies sense an opportune moment.  Odds of success with cross-border transactions can be improved when working with a global investment bank with local staff based on both sides of the border.