The Market is Peaking and the Window is Closing

According to GF Data Resources LLC, which collects transactional data from over 200 private equity groups (PEGs), the average lower middle market EBITDA multiple paid was 9.1x in 2015, which is up 16.6% over 2014.  GF Data defines the lower middle market as companies with values between $100M to $250M.  These multiples are some of the highest historical multiples paid for lower middle market companies.  When analyzing the entire market, PEGs paid an average of 10.3x EBITDA for companies in 2015, this exceeded the 9.7x they paid in 2007.   These stratospheric multiples make it very difficult for PEGs to show an above average return on investments to their limited partners.  So to achieve good returns, PEGs have relied on the debt markets to provide lots of cheap capital and as a result, higher leverage is used to close transactions.

With interest rates increasing, albeit slowly, there is no room for M&A multiples to continue their expansion.  GF Data sees multiples flattening in 2016; however, with the amount of dry powder in the market no one expects deal flow to slow.  If multiples decline slightly, GF Data believes PEGs will be more active as they need to put their committed capital to work.

Owners contemplating selling their companies should be aware of business cycles and understand that the current window has started to close.  Jeff Mortimer, the director of investment strategy at BNY Mellon, published a chart that shows investor sentiment and overlaid it onto the stock market cycle, which is then overlaid onto the macroeconomic indicators.  Historically, increasing interest rates signal the beginning of the end of the current economic cycle.  So the window is closing; just look to the stock market for proof. 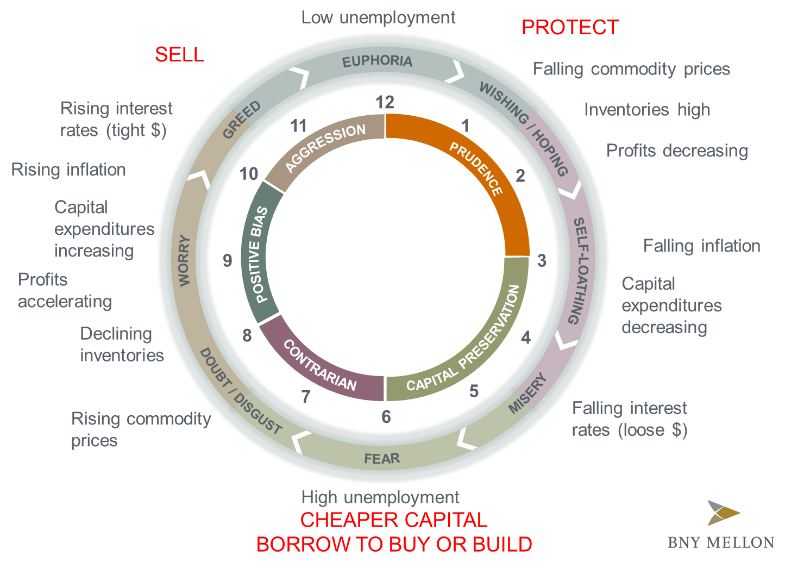 So if you are a business owner, are contemplating selling your business, and want to maximize your selling price, the time to sell is right now.  We are at the peak of M&A valuations, and the economic indicators point to the cycle ending.  After the window closes the cycle typically takes 5 to 7 years to reopen, so if you are not ready to sell now, start thinking about conserving your cash to be prepared to go through the next down turn.  With the cash you stock pile now, there will be buying opportunities for you when the market hits bottom.