According to data published by international financial data tracker Bureau Van Dijk, middle market (deal value of $50 million to $500 million) deal volume and value in North America declined in 2015. There were 10,517 middle market deals worth an aggregate $254.93 billion announced in 2015 compared to 11,296 deals worth $313.73 billion in 2014. The year-over-year volume decrease was 10%, while value declined 19%.

Healthcare and technology were the most active sectors driven by multiple mega deals in each segment. The biggest deal announced in 2015 was drug giants Pfizer and Allergan’s pending $160 billion merger. On the technology side, the largest transaction was the $78 billion Charter Communications Time Warner Cable merger. Another mammoth deal took place in the food and beverage sector when Anheuser-Busch InBev reached an agreement to buy U.K. rival SABMiller in mid-November for $120 billion.

The availability of financing remains strong – especially in the middle market (borrowers generating less than $50 million of EBITDA) – as the Federal Reserve continues to sit pat on interest rate increases. According to data from S&P Capital IQ, middle market leverage in the third quarter climbed to a record of 5.6x, from the previous high of 5.3x set in 2013. Senior leverage stands at 5.5x, eclipsing the previous record of 5.2x, also set in the third quarter of 2013.

Year-to-date overall middle-market loan volume is approximately $8.6 billion, a 24.1% decline year-over-year, and the slowest pace since 2016. The trend mimics large-cap volume, where the drop is slightly less steep, at 22%.

Oil prices continued to slide in 2015 declining 30% for the year to close the quarter at $37.04 a barrel. Brent, the global oil benchmark, dropped 35% to $37.28 a barrel. This was the first time since 1998 that U.S. prices posted two straight years of losses. Saudi Arabia and Russia continued producing throughout the year putting a steady stream of downward pressure on prices.

The collapse in oil prices slowed M&A in the oil and gas sector. In 2015, the total combined value for all upstream deals in Canada topped Cdn$21 billion, about half of the 2014 total of Cdn$41 billion. Still, there is a significant buying opportunity for strategic companies with strong balance sheets looking to pick up struggling competitors on the cheap. 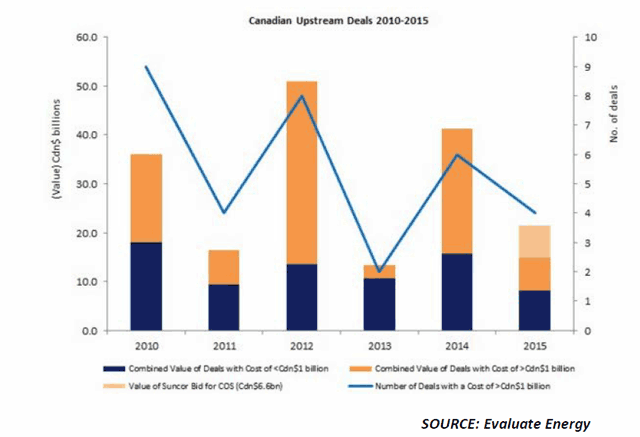 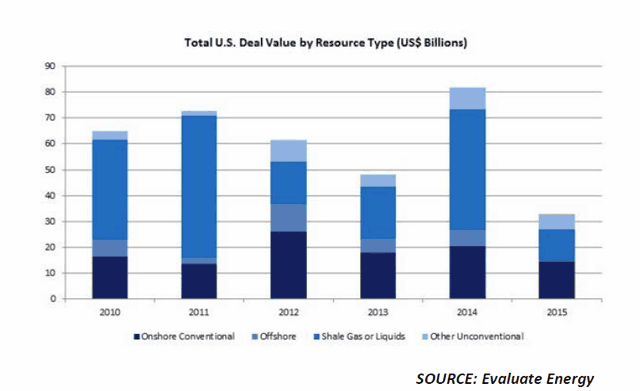 While the public markets may not be as buoyant as they have been over the past five years, there is still plenty of cash sitting on the sidelines that could be put to work via M&A. Five years of strong growth and steady recovery in the U.S. is giving savvy cash-rich buyers an opportunity to grow via acquisition at prices they may not have seen over the past two years.

America’s corporations are still flush with cash, and gaining capabilities or capacity through acquisition is still the fastest way to grow.

From a private equity perspective there is still plenty of dry powder – $1.3 trillion according to private equity tracker Preqin – that needs to be deployed. In fact, a fair amount of that total has been used to take public companies private. In early 2016, Apollo Global Management acquired formerly public ADT Corporation for $11.9 billion.

Election years can always cause a bit of stagnation until buyers and sellers know for sure who will be in charge, but there is plenty of money sitting on corporate balance sheets and private equity coffers waiting to be put to work. Expect 2016 to be an active year on the M&A front.