M&A News In The Print and Packaging Industry Sector 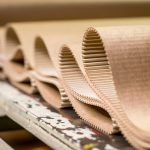 The price of pulp, paper and other allied products flattened out in the second quarter benefitting manufacturers who’d faced steady price increases since July of 2017.