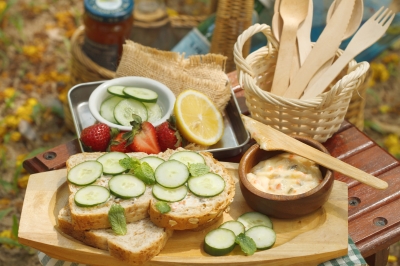 On the public markets, the S&P Food & Beverage Index held steady compared to the rest of the market in January but remained somewhat flat as the quarter ended. Starbucks (SBUX) continues to be one of the sector’s public leaders. The stock has appreciated 49% over the past year and currently yields 1.33%.

As consumers become more interested in products free from artificial dyes and flavors, a growing number of food manufacturers are using natural spices to color their packaged foods. Kraft Heinz recently began using turmeric as a replacement for yellow #5 and yellow #6 in its flagship macaroni and cheese brand. Annatto is another spice that is increasingly being used in place of yellow dyes, while paprika gives an orange color to products ranging from sausages to cake icing, according to The Wall Street Journal. Several other major food companies, including Hershey’s and General Mills, are also increasing their use of spices and other natural ingredients. Food manufacturers must invest heavily in research and development to ensure that the new recipes don’t affect an item’s taste or texture.

Sales of coconut water are growing steadily in the US and globally as consumers continue to stock up on healthier beverages. The US coconut water market reached $778 million in annual revenue in 2015, a 27% increase from the previous year, according to Technavio. The research firm expects US sales to continue growing by about 26% per year through 2019, to about $1.9 billion. Leading US coconut water brands include Coca-Cola’s Zico, PepsiCo’s O.N.E., and Vita Coco.