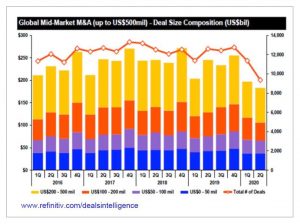 While there were significant regional differences, first half 2020 M&A transaction numbers are in and they are better than many would expect. Refinitiv™ reports there were 20,728 deals under US$500 million closed globally and 5,152 deals in that size range closed in the US. As the chart shows, the second quarter was lower than the first but also not by as much as many might have expected.

With so much COVID related disruption in the economy, how do we explain why activity has not declined more? Firstly, except for the energy sector, the COVID impact did not hit most sectors until the tail of Q1. Additionally, Q2 was not down to the extent many would have expected with 2,514 US closed deals reported in Q2 vs 2,638 reported in Q1.

Technology has proven to be highly resistant to COVID’s impact and was barely down at -3% compared to a year ago. The technology sector represented 17% of all deals to lead all sectors while real estate related M&A totaled 15% of first half deals. There are also some deals that are being driven by necessity though US government assistance programs have clearly helped to limit the number in the US, at least for now.

While some companies are electing to defer their plans to go to market, others are moving forward. Companies that are going to market are generally finding many interested but cautious buyers as buyer demand remains keen while the number of sellers has diminished. In fact, PwC reported a surge in enterprise multiples during Q2 as investors rushed to invest in technology, media and telecom companies.

As government assistance programs taper off, we expect to see more interest in non-control equity and debt investments from private equity sources. Many private equity sources are actively promoting their existing non-control interests and others are rolling out new programs in anticipation of companies that need to strengthen their balance sheets to address bank concerns.

For more information contact your local Corporate Finance Associates investment banker. We will be pleased to discuss your questions without obligation.